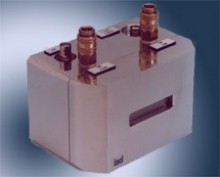 Position sensitive detectors (PSD) have been around for many years and their successful application to X-ray diffraction experiments has been well documented. Early PSD detector designs are based on fragile wire anode technology, problematic due to the fact that they are easily damaged by over exposure to X-rays and are often microphonic. To overcome these problems, we have pioneered a new technology in which the fragile wire anode has been replaced by an indestructible alloy "knife edge " blade anode which is non microphonic, does not suffer from over exposure to the X-ray beam and is very rugged. Inel linear position sensitive detectors enable diffraction experiments to be made on powders, solids and liquids. The detectors are linear and straight provides optimum resolution for each and every experiment including XRD, SAXS, WAXS, etc. When used as part of an X-ray experiment Inel detectors will measure the entire diffraction pattern simultaneously. Inel linear PSD detector.

Equinox PSD detectors are either a linear or curved chamber into which a solid blade anode and segmented cathode is mounted. Within the chamber there is also a cathode assembly and with the addition of argon / ethane gas, the detector can be defined as a proportional type detector. When an X-ray photon becomes incident on the detector anode an electrical charge develops on the cathode at a position that is spatially coincident with the incident photon. This electrical charge can be measured in terms of its intensity and position about the anode / cathode by way of a delay line. This signal is digitized and then stored in an electronic card. The desired S:N is achieved by multiscan accumulation. In practice an excellent diffraction pattern can be recorded in just a few seconds and at very high resolution.